Emoji-cize is a simple, flexible game with materials that can easily be printed out for use in a variety of contexts. Furthermore, it's a game that could be adapted to a mobile format.

Game components include the following, which can be printed and cut out with scissors:Each card can then be cut out using scissors, like so: 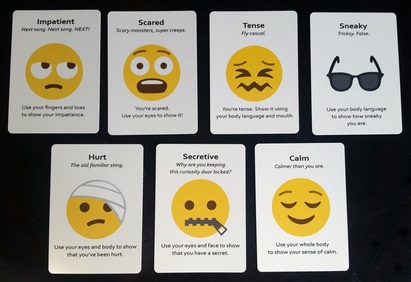 ​Then, each emotion chip should be cut out using scissors, as shown below.

*Note: for younger players or those with dexterity impairments, cutting larger squares may make cards and chips easier to grasp. 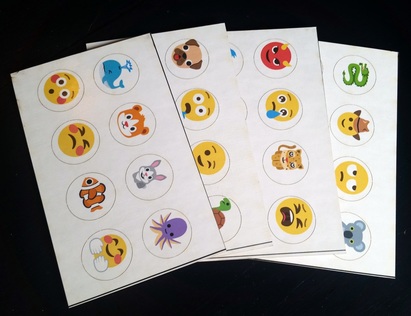 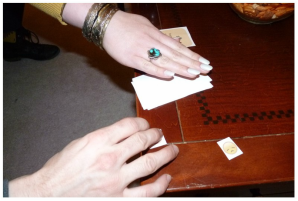 Player 1 is an Android who doesn’t understand human emotions. It’s Player 2’s job, as the "Empath", to teach emotions and empathy to the Android. To do this, the Empath player must demonstrate emotions in a variety of ways. The Empath player will draw a card from the deck; each card has an emotion listed on it, as well as an associated emoticon. Each card also includes specific instructions about how the player must enact the emotion. For example: demonstrate the emotion of Anger using your eyes and mouth, or demonstrate the emotion of Grief using your whole body. When both players work together so that the Android can correctly identify the emotion, each is awarded an “emotion chip”.

Players earn emotion chips for working together to enact and recognize emotions. Emotion chips consist of a variety of printed emoticons and facial expression based emojis. At the end of the game, the player (or team) with the most emotion chips wins.

Many players enjoy Emoji-Cize without the use of a timer, but for added difficulty a timer can be used. For each card drawn, the Android player has 1 minute and 10 seconds to correctly guess the emotion being enacted (the first 10 seconds are devoted to an "Empathy Break", allowing the Empath player to think about and feel the emotion on the card, drawing upon their experiences). If the player is unable to guess the emotion within that time limit, the Empath chooses another card to enact. Each round is 3 1/2 minutes long.

*Note: round times are flexible, and can be adapted to best suit the age(s) and abilities of players.

1. The Empath player draws an emotion card. For example, "Show that you're deep in thought using your face and hands." 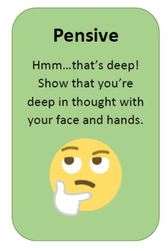 2. The Empath player takes 10 seconds to reflect on and feel the emotion on the card (an "Empathy Break").

3. She then demonstrates/enacts the emotion using the provided acting instructions. For example, she might set her mouth in a firm line, furrow her brow, and place a finger on her chin. The emoji on the card may provide a starting point to help players consider how the emotion might be enacted. The difficulty level of the game can be adjusted based on the players' ability levels: ​*Note: many players enjoy mixing the decks for variety. Any combination of the versions described above may be used based on players' age and ability.

5. Both players earn an emotion chip for each correct guess. If the Android cannot guess the emotion correctly (and gives up), the Empath can choose another card.

6. If using a timer, the Empath player continues to draw a new card until the round time is up, at which point play rotates to the next team or player. If not using a timer, teams/players can switch roles after each correct guess.